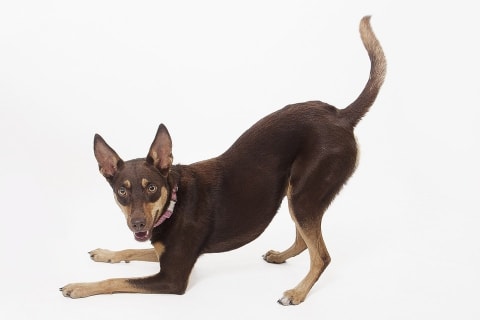 The Kelpie is an iconic Australian working dog that is famous around the world for its amazing herding skills. The origins of the Kelpie aren’t very well documented, but it’s said they originated in Australia from British collies, sheepdogs and even wild dingos. As such, the breed is hardy, smart and able to withstand hours of running in the dusty Australian outback.

The name ‘Kelpie’ comes from the legend of the mystical Gaelic water-spirit in the form of a horse. It's said to have been given to the first Kelpie born in country Victoria in the late 19th Century.

Like the Border Collie, the breed is found around the world herding many types of livestock. Furthermore, their intelligent nature makes them ideal service dogs in areas such as search and rescue, detection, sight and hearing assistance and therapy work.

Physical Appearance of the Kelpie

Kelpies have a very athletic, slender build made to withstand hours of running in the hot Aussie outback. They have a handsome face with pointed ears, a narrow head and a long muzzle. Furthermore, their long legs and light, muscular body make them incredibly fit and able to run up to 60km a day.

The Kelpie usually weighs between 11kg and 20kgs and stand up to 51cm tall. They have a short water-resistant coat, that comes in shades of red, black, blue, chocolate, tan and fawn.

A Kelpie can run up to 6.4km an hour, making them a great jogging partner! Furthermore, they are agile and able to crouch, crawl and change direction at high speeds. As such, a happy Kelpie is one that has a job to do and plenty of space to stretch their legs.

Kelpie’s are friendly, loyal dogs that get along well with people and pets alike. They are easy to train because of their intelligence and alert nature. However, they can display destructive behaviour if they are bored or left alone for long periods. Likewise, their natural instincts can lead them to herd up smaller members of your household! As such, give your Kelpie plenty of other opportunities to burn energy and use their brain in other ways.

The Kelpie can bark a lot, making them ideal as a watchdog. However, with good training and socialisation, they aren’t known to be aggressive. 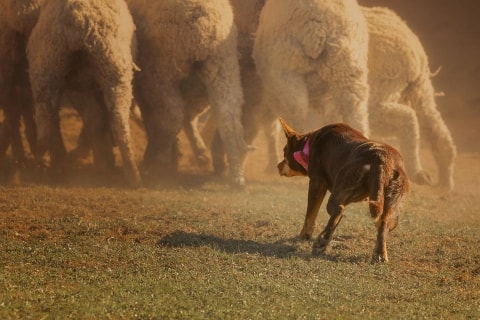 Kelpies are born athletes and must exercise solidly at least once a day. For example, take your Kelpie for a sprint at a dog-friendly beach, dog park or training course. Without enough exercise, a Kelpie will become unhappy and prone to barking, chewing and other problem behaviours.

It’s also important to teach your Kelpie to come when called, as they are too fast to catch if they run away. As such, be sure to train them from puppyhood and seek help from a dog trainer if you have any problems. This breed loves to use their brain and benefit from challenging training puzzles and problem-solving.

Living with a Kelpie

The Kelpie is not a breed to live happily in a small apartment or city block. Instead, this dog needs space to stretch their legs, such as a large escape-proof backyard or property. If they don’t get enough exercise, their obsessive-nature and high-energy can lead to destructive consequences.

Likewise, Kelpie’s need adequate time and focus from their owners to train and exercise them. If you can incorporate this into your daily routine, they can be incredibly rewarding to own. Their quick-thinking and hard-working nature make them natural at ball games, dog sports and scent-tracking.

Kelpies don’t have a lot of major health complaints and can live up to the ripe old age of 15. They are bred to be tough, so only have a small number of hereditary problems to look out for.

Health problems that can come up in the Kelpie breed include: 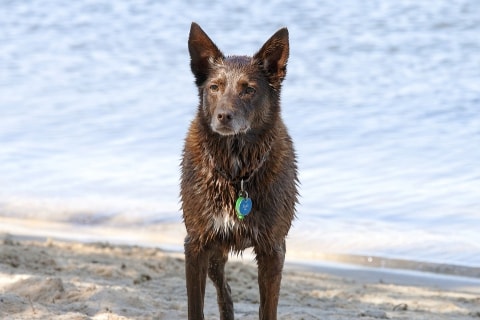 Kelpies have short coats that will need a weekly brush. However, this can increase substantially during shedding season. If left unbrushed, expect piles of fluff all over the place!

The Kelpie’s water-resistant coat takes care of itself and only needs the odd bath using gentle dog shampoo. And lastly, you might want to trim their nails from time to time, as they can get quite sharp if not worn down naturally from running.

Do you own a Kelpie that needs a lot of space to run around in while you are on holiday? We can help - search for dog boarding in your area to see who is nearby with a garden for them to burn some energy in. Visit our homepage to find a perfect sitter today!

How long can you leave a cat home alone?

Cats might seem super independent, but they have social, mental and physical needs just like any other pet. As such, it’s best that your cat has some company at least once every day in order to remain happy, safe and healthy. Here is why.

Is my dog too dependent?

Worried that your dog is too dependent on you? Every dog can benefit from more independence! Here's how to train your dog to be less needy.

What can you expect from a dog sitter? How do you know you've found a good match? Here's how to make the right choice the first time.